“Mom, can you do something, please…”

Jael’s voice trailed off as she spoke to her mother on phone. She started sobbing even before she hung up.

Life had not been kind to Jael. She felt older than her 42 years of age. Where did she go wrong?

She closed her eyes and allowed her mind to wander. She grew up in an average family. Her mother was a teacher while her father was a businessman. Her father was now deceased and her mother – who had already retired from her teaching job – was in charge of the family businesses.

Jael’s marriage was full of ups and downs. She met Mike when still at the university and they started dating almost immediately. He was really charming and treated her like a queen. They moved in together a few months after her graduation and legalized their union less than a year later.

Mike treated her really well, taking her out for surprise dinners and occasionally even taking her away for weekends to exotic locations in different parts of the country. This did not stop even after the children came. The family lived quite well and life was good.Mike and Jael were blessed with three children; two girls and one boy.

All No Longer Well?

The first indication that all was not well in their lives happened after 15 years of marriage. There were many times that Mike’s phone would ring and he would not pick the calls. Then, Mike changed his telephone line without any explanation. When he told Jael that he had a new cell phone number, she was surprised. She asked him why he would change his number yet most of his contacts did not have the new number. He could not explain but told her that it was no big deal.

Things just did not look the same. Mike’s circles had changed. He no longer seemed to keep the same company like before. He had also become secretive. Suddenly, Jael realized that her husband was slowly becoming a stranger. She started wondering whether he was in an extra-marital relationship that he was trying to hide from her.

It did not take long for her to fit the jigsaw puzzle. She started receiving telephone calls from people who were known to both of them, requesting her to tell Mike to switch on his phone for they were trying to get in touch with him. She would tell him but he would not comment.

With time, the message in the calls changed to telling her to let Mike know that they were expecting the payments as agreed. When she would give Mike the messages he would not comment.

Trouble With The Law

It was not until the day that a colleague from Mike’s office called Jael to inform her that Mike had been arrested. That was the beginning of a long journey of turmoil for Jael and her family. The family got auctioned twice within a space of one year and Mike got arrested a number of times. Their lives turned into a nightmare.

It was a rude awakening to Jael to discover that a lot of what she believed about Mike was fake, including his academic credentials. He even had a fake identity and some people knew him by names she did not know. In short, Mike’s life was largely a lie and he had misrepresented himself to many different people mainly to extort money from the unsuspecting people.

The first few times her family got into trouble, her mother and her siblings put some cash together and bailed her family out. They helped out a number of times till it dawned on them that Mike’s problems were beyond what they could handle.

Jael would call her family members and beg them to help but they totally refused to get involved. She eventually surrendered to fate. Mike was found guilty of a number of crimes and sentenced to prison.

Jael started to rebuild her life from humble beginnings. She moved to a cheaper house that she could afford to pay for. She struggled to keep the children in school and often paid school fees in installments. The high life they had lived for years gradually became a distant dream.

The children struggled to adjust to their new status and it was initially difficult for Jael to cope with the backlash. They got angry, became rebellious, got into trouble in school and in the neighborhood and disobeyed her. It was a very difficult road for her family but she took it one day at a time.

A man is the head of his household. He provides direction and leadership for his family. To learn more about how to effectively lead a family, here are useful tips secure-your-family’s-future-through-strong-leadership.

We often like to quote about the two becoming one in marriage. So, now that you are married, do you take responsibility for the behavior of your spouse, whom you consider to be your better half?

Two people meet when they are already adults, fall in love and decide to get married. In a few exceptional cases, couples have known each other from a young age, sometimes from childhood.

Should You Take Responsibility For Your Spouse’s Behavior?

You are married probably to the love of your life. Is it your fault that your spouse is cheating on you, disrespects or abuses you or probably engages in criminal activities? Is it your behavior that taught him or her to be that way, to treat you that way or to have a certain attitude towards family responsibilities?

Human behavior refers to the sum total of actions and emotions associated with a human being. It is complicated. For those who think that everything human behavior is simply a matter of good or bad choices, that is oversimplifying a complex topic.

So, What Shapes Human Behavior?

Genetics refer to the traits we inherit from our parents. Genetic influence on behavior has been studied using identical twins who were adopted by different families at birth such that besides inheritance, everything in their upbringing environment was different. Siblings who were adopted sometimes discover each other as adults only to find out that they have a lot of similarities and not just in terms of physical appearance.

An individual’s behavior is shaped by the group one is a part of. That is why people from the same cultural or religious group have similar attitudes and practices such as what they consider an acceptable dressing code. There is warmth in a sense of belonging and human beings make effort to fit in or to find acceptance, even when the practices of the group might be destructive to them. Norms also govern families.

Attitudes have roots in past experiences and conditioning. An individual associates certain things with certain experiences. For example, a child associates going out to the park with pleasure and going to the dentist with pain. Changing one’s attitude takes a conscious effort to question the norms. Negative attitudes can be changed by evaluating reasons behind the attitudes.

Behavior is affected by what is going on in our bodies. Hormonal changes at certain periods of time such as teenage, pregnancy, during certain times in women’s monthly cycle and during menopause; affect behavior.

Nutrition also affects behavior and that is the genesis of the saying ‘a hungry man is an angry man. Hunger or having a brain that is starved of nutrients affects mood negatively and can make one quick to anger. Conditions such as having a brain tumor in certain areas of the brain or having low levels of feel-good neurotransmitters in the brain can affect mood negatively.

The mind and body are connected and influence each other. That is why we talk of ‘a healthy mind in a healthy body’.

All human beings face difficulties and challenges from time to time but some cope better than others. Coping mechanisms are dependent on one’s overall personality and lessons learned in life. There are people who train themselves in coping mechanisms such breathing in and out before reacting when provoked or engaging in vigorous physical activity when angry. Coping mechanisms can be trained as part of upbringing, through therapy or one can learn them independently.

When two people get married, the behavior of each of them is already fully established; it is not taught by the spouse. Much as one can do their best to influence the spouse positively, there is a lot that is already deeply entrenched in the individual that might not be possible to change, unless through therapy.

Achieving behavior change takes work; it is not handed to anyone on a silver platter. It, therefore, depends on whether the individual is ready to pay the price of change or not. People do not change themselves because someone else told them to change. 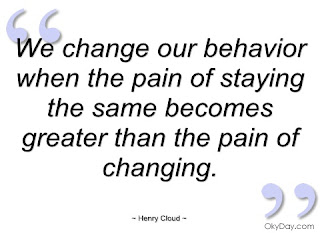