Richard had worked with an airline company for 6 years. He loved his job. He had married the girl of his dreams and they were blessed with a little girl who had just celebrated her 2nd birthday. His wife worked as a teacher in a school in the neighbourhood. Life was good.

The world that Richard had known for years came crashing down when the airline company announced downsizing of staff. His name was on the list of those who were to be laid off.
It was painful to lose the job he loved, to walk away to the unknown. He officially joined the statistics of unemployed people.
His once beautiful marriage started facing some bumpy sections when he could no longer provide. Gradually, his relationship with his wife became strained.
His parents could not understand why he was no longer sending some money home every month to support his younger siblings. His life became stressful.

I remember meeting Richard when he was at the lowest of the low. He had been jobless for 8 months and his situation bordered on desperation. I struck a conversation with him and tried to gauge his plans. He was 100% focused on finding another job. He had completely closed his mind to any other option.
I tried to ask him what he was passionate about besides working in the airline industry, but he could not think of anything. I asked him what skills and expertise he possessed that he could utilize creatively to come up with a stream of income but he could not see any possibility outside employment.
I hit a wall in my efforts to help Richard open up to the world of possibility and I had to let him be.
Richard and I met again two years later. His situation was not rosy at all. His marriage had broken and he had moved from the city to the village, where he was trying his hand at farming but was not making much progress.
He was no longer the smart, confident young man he used to be. His efforts to get a job had not borne any fruit and he appeared to have resigned himself to fate.
I encounter many such cases of people who are so focused on formal employment they completely fail to see the different options right in front of their eyes.

The topic about money is not taught in schools and most of what people believe was taught at home as they were growing up. The rich teach their children different from what the poor and middle class teach their own. The rich talk about assets, liabilities, investments, business partners, etc.
The poor and middle class talk about job, benefits, security, comfort, spending (buying things to make life enjoyable such as flat screen TV, car, furniture; taking holidays, living in certain neighbourhoods, etc.)
They worry about and feel uncomfortable about money. They are always in fear about not being able to pay their bills. Their lives revolve around working to pay bills. They are forever being chased by bills.
They pay everyone else and pay themselves nothing so they remain in the cycle of financial struggles.
They buy liabilities and because of that, they spend more and more to maintain those liabilities. The rich invest in assets, which continually put money into their pockets whether they are working or not.

Educating people about financial independence has brought me face to face with the sort of crippling fear the poor and middle class have about money. They are terrified to imagine a life without job security. Imagining a scenario where the landlord will come knocking and issue threats if rent is not paid on time cripples them completely.
They hold on to a job and push themselves to work harder and harder but they fail to build their assets column so they never quite make it to become financially independent. Majority live in that cycle until retirement, when they retire poor and dependent on others.

Feel the fear and do it anyhow

To attain financial independence, you have to go beyond your fears. You have to get out of your comfort zone. Work your job but build assets that create alternative sources of income for you. Do not be 100% dependent on a job for you will not always have it.
The foundation to attaining financial independence is working on changing your mindset. You have to learn to stop being nervous and fearful about money. No one has money all the time. Even the rich people who look like they have it all together fall back on payments sometimes and having someone calling them up about late payments.

Transform yourself to the person who is worthy of success

The hardest work when it comes to breaking free from a cycle of poverty is working to transform yourself from who you are now to who you want to become. 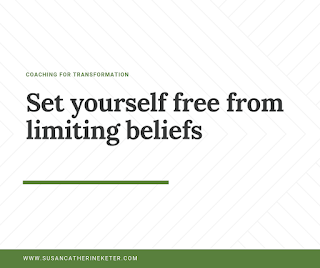 Choose carefully what you feed your mind on. Read/watch/listen to what gets you closer to your goals.
If you are not satisfied with the life you’ve got, change your circles. Surround yourself with people whose value systems are in line with the life you want to build for yourself. Replace those whose value systems keep you stuck in your comfort zone.
Nothing is handed to anyone on a silver platter; you have to put in the work to become the person you dream of becoming. If you don’t like the life you’ve got, change it; you are not a rock!
This article is written by Susan Catherine Keter Website: www.susancatherineketer.com
Financial Independence Africa