Patrick was born and brought up in a small village in Nyeri county. His family was not rich by any standards. His parents were peasant farmers and life was challenging. He and his 5 siblings went to rural schools and despite the challenges, he completed high school successfully.

Accessing college education remained a mirage because his parents were struggling to give all the children basic education. He became an untrained teacher in the village and that way, he was able to earn an income.

One day during the festive season, a long lost uncle of his joined the family for festivities. The uncle was clearly living large and money was not a problem to him. He was driving a car, wearing nice clothes, spending the nights in a hotel in town rather than in the village and was very generous to family members.

Patrick was hungry for any opportunity that could get him out of the life of chronic financial struggles so he approached the uncle and asked him how he managed to transform his life. That was how Patrick got introduced to the world of mining gemstones.

Patrick continued with his normal life as a teacher in the village, but what his uncle told him remained at the back of his mind. He longed to get out of the normal routine of chronic financial struggles and into a life of plenty, like his uncle.

Life took a downward turn when his father was diagnosed with a terminal illness. The struggles to get treatment for him almost pushed Patrick to his knees. The family really struggled and for him as the first born, the bulk of the responsibilities fell on his shoulders. His father eventually died, but by the time he was buried, Patrick had accumulated much debt and was at the point of desperation.

The well-to-do uncle attended the funeral and Patrick made sure that he got some time with him because he wanted to learn how he could get out of debt. His uncle promised to help him learn. They agreed that as soon as school closed, Patrick would travel to Voi where the uncle was involved in the mining of gemstones.

Patrick could barely wait to learn how real money is made. As soon as schools closed for the December holidays, he joined his uncle in Voi, ready to make the big money.

The journey to making the big money was not very easy but with an uncle who knew the ropes, he was saved much risks. He did not have capital to enable him get into mining so with his uncle’s support, he traveled back home, subdivided the family land and sold 4 acres, leaving the family 2 acres to live on.

He told his mother that she would not have to suffer for long because he was going to change the fortunes of the family. His mother had already seen how the life of the uncle who was mentoring Patrick had changed so she had confidence that they would soon be rich.

He went back to Voi, loaded with capital that would transform him into a wealthy man. Patrick’s uncle was knowledgeable about the mining of gemstones, having been in the industry for years. They did not take long to make their fortune.

Less than 2 years after getting into the business of mining gemstones, luck smiled on them and Patrick found himself in possession of more money than he had ever dreamed of, not even in his wildest dreams. He was now a rich man. He was in his early 30s and rich!

He travelled back home and bought 5 acres of land for his family. He put up a permanent house for his mother. He then paid college fees for his 2 younger brothers who had dropped out of school due to financial problems.

A Fool And His Money Are Soon Parted

The saying that a fool and his money are soon parted must have been spoken of people like Patrick. He thought that his money would never run out. It did not take even 3 years for Patrick to be flat broke with no source of income. It suddenly dawned on him that he had no marketable skills, apart from teaching and mining. Teaching would not pay him the sort of money he needed, having tasted some serious money. He opted to go back to mining.

It is almost 30 years since Patrick first ventured into the business of mining gemstones. Luck has smiled at him on numerous occasions over the years and he has handled more money than the average Kenyan can ever dream of handling in a life time. He has lived the life; travelled to some exotic locations on our beautiful planet, driven some of the latest vehicles, spent nights in some top hotels and so much more. His wife and 3 children have enjoyed some privileges that many would not even dream of.

Patrick however has no investments, no other sources of income besides mining. If he stays a couple of years without any real luck in mining, he ends up in serious financial crisis; he gets deeply in debt, sometimes he ends up selling personal stuff in order to survive. His marriage has been rocky because of uncertainty. His wife is a teacher and there are times she finds herself the bread winner of the family because Patrick has no money whatsoever.

Patrick’s life would be smoother if he had invested in financial literacy. Being in the mining industry means that he does not work full time. He could read personal development books and listen to audios in his free time. He got a mentor in the mining industry and that was instrumental in his success. He would do himself a favour by identifying a mentor in investing, or at least surrounding himself with the right people so that he can learn from them.

He could learn how to diversify his sources of income, especially by investing in assets that earn him money passively. He makes large sums of money but the flow of income is not consistent. Sometimes he can stay for a year or two without any income and such times deplete the income he has earned during his good days.

He could have different outcomes if he could plan his life, identify the sort of lifestyle he desires then invest in assets that will provide that lifestyle for him. His number one problem is that he finances his lifestyle from one source of income which is active income, not passive income. He earns money, spends it, waits for the next income. 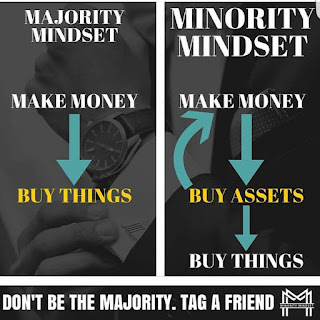 It does not matter how much money passes through your hands. What matters is how that money works for you. 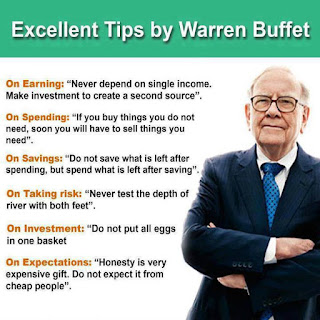 Work hard to earn your money then ensure that the money becomes a good soldier who goes out and brings you a bounty harvest. Let your money work hard for you. Money is a hard worker, working even when you are asleep. Money will continue working for you even when you will no longer be able to work, so tame this useful servant and get him to serve you faithfully for as long as you live, and working for your dependents when you are gone. 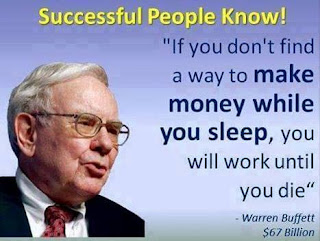